Besides my most last soiree reflexive post, I’ve had trouble adding to this blog. It might be a matter of being unable to gather my thoughts. Or, merely the fear of being able to truly express the experiences I’ve had recently. Either way, this will be a long one, so be prepared. 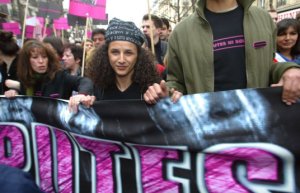 I will tell you, the language is hard. Everything in this post actually took place in French, and I am hitting my fluency wall. There are two levels of fluency—mere communication and depth of expression. I am at the mere communication stage, but I cannot be profound or intelligent or even have a personality in French. Mais, je me débrouille.

In fact, everything about my work at Ni Putes Ni Soumises is more than I could have asked for. Powerful feminism combined with psychological and legal work with survivors of domestic violence—no better equation.

Not only that, I love the atmosphere of the French workplace. When I arrive in the morning, I go into every office to say “hi! how are you?” to all the women (and the few men) who work there. It’s an unspoken code. President, coordinator, secretary… I never enter my own office before I make the rounds of the building saying hello.

Then there’s the coffee pot. In the kitchen. The first person who gets to work fills it to capacity with hot water and lets it brew for everyone else who arrives later. It’s the quietest way of saying, “I thought about you.”

Then there are the breaks. A lot of them. Imperative. An hour for lunch. Fifteen minutes every time you get tired of your computer screen. Everyone cares about the work that they do, but no one kills themselves over getting it done. As a result, no one stresses out, and we still manage to change lives. 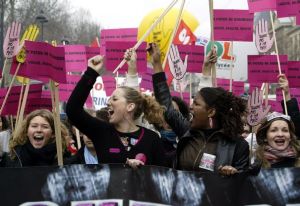 But most of all, I love working with the survivors themselves. I have read the entire stack of dossiers of all the women who’ve been through the organization in the past few weeks, and out of confidentiality and respect for their stories, I will not discuss anything to revealing detail. Yet, they remain the people who have touched me the most, and I will just share a little about how I have been able to work with them.

My first day, my maitre de stage (the wonderful woman whose job it is to help the survivors on legal and psychological grounds and who advises and directs my internship) was not there when I arrived. She was out accompanying a woman to the prefecture, so I sat down to wait for her. I was on the couch beside a woman who had come in to see the psychologist. Her face was tired, her eyes black, but I looked at her and her eyes were incredible. Bright and beautiful. So, I told her so. As she lit up at the compliment, I felt a wave of relief like, This is what I live for! I love when there is light because it means there is hope in hardship. I am so grateful I declared a psych major last year; I am so grateful for the passion I have to do this; I am so grateful I believe in it and am restored by it every time I walk into that building.

Yet, inevitably, there are tough moments.

For example, the third day of my internship, the secretary decided to leave me answering phones for four hours. None of the phone calls were very important, until it was 10 minutes to closing, and it rang. I answered “Ni Putes Ni Soumises, bonjour!” A woman replied without introducing herself, “J’ai des soucis.” I am worried. Because the secretary had told me that under no condition was I supposed to transfer calls, I immediately did what I had done with all the other phone calls: Oui, madame, pourriez-vous me donner votre nom et vos coordonnées? Can you give me your name and number? The woman on the other end panicked, No No! I’ll call back later. Then I stopped her, No! Please, wait just a second; I’ll see if someone can speak to you now. I put her on hold and got my boss. But when I went back to the call, she was gone, disconnected, scared. I put the phone down and for the next fifteen minutes I sat and begged the phone to ring, for her to reach out to us one more time. It didn’t ring. We closed the office.

It was difficult to detach myself from being unable to help, to walk to the metro stop right afterwards and catch the line 11 towards home, knowing this anonymous caller was somewhere in Paris at that very moment, worried, afraid. Somewhere a woman needed help, and I wanted to wait by the phone all night for her to call back.

Another difficult moment took place after the first week. To help my maitre de stage, I am making a huge report on types of violence against women, definitions, and consequences on their bodies, mind, emotions, lives, and sexuality. The research is extensive. I work countless hours on this rapport and never feel that I have encompassed all the violence there is to articulate. Not only that, I am combining the resources of every French website on the issue and every English website on the issue. An invaluable combination, as each culture looks at things slightly differently and each adds important facts, information, and dynamic. Today, in the midst of this research, I got overwhelmed. All of the sudden, I felt like the only thing I could do to react to the violence was weep.

I won’t forget that instance. For as much as I have a very strong, healthy, and positive relationship with the work I am doing (combining a professional distance with a sensitive and affirmative warmth), there are times when I feel for the women even as I help them; I hurt for them even as I uplift them. And there is nothing wrong with that. I actually think it’s positive to be touched by your job. If you are apathetic and unfeeling, where is the passion? where is the force? That brief suggestion of tears was not me breaking down or falling apart; it was me renewing my conviction, affirming my strength, realizing the power I have to fight this fight.

A final experience occurred a few hours before our big Ni Putes Ni Soumises gala Monday night. The gala was an incredible fundraiser where a huge assortment of female humorists performed uproariously funny and empowering skits before a packed house at the Casino de Paris in the 9th arrondissement. 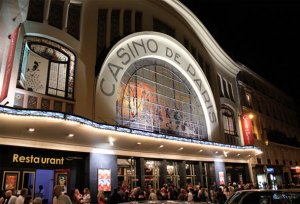 Everyone left work at 5P.M to go prepare for the gala, but Thérèse, my maitre de stage, and I were working with a survivor in a tough situation, so we remained behind in the 20th until we could get the survivor the help she needed. Thérèse was in her office speaking with her, and I had gone out onto the porch for a quick break. The woman’s little son was out there, bouncing around with energy. He bounded up to me and started chatting it up. He quickly noticed my accent, though he must have been around 8 years old, and asked me if I spoke English. I said yes, and he started rattling off the few words he knew. Hello. Thank You. Goodbye. Then without hardly any transition, he started to tell me about men who beat their wives. All the while, he was running around on the porch, talking breathlessly and very seriously. Then he jumped up onto a potted plant and started playing with the spiky leaves. “Do you know why you shouldn’t play with this plant?” he asked me. “Why?” I asked. “Because the leaves will hurt you,” he said. “Then why are you playing with it?” I asked. And he replied using a phrase that is so untranslatable into English. “Parce que je suis en douleur.” Douleur is a word that encompasses all at once pain, sorrow, hurt, grief, sadness, distress, aching.  Because I am ‘en douleur.’ I am aching, hurting, sad, grieving. Then he bounced down from the plant, and he started talking about winter, the leaves changing colors. The things kids talk about. I led him inside to the office, and he immediately started playing with the toy cars Thérèse keeps for situations like this. All the while, he didn’t stop chattering. He told me about how the moon is magic and over time it makes you grow up. He asked me if I was on a motorcycle and wanted to cross a canyon where there was no bridge, what I would do? I told him I would build one. He smiled. He climbed into the chair with a toy car and proceeded to kick his legs, rocking the chair so it clacked against the linoleum floor. His mother looked frazzled and Thérèse asked him to stop. I took his hand and said, “Let’s go play outside.” I played toy trucks and toy cars with him in the lobby for twenty minutes until his mother finally emerged. As they were leaving, he grabbed my arms like little kids do and asked me if I would come home with him. I said, I couldn’t. He let his mother lead him away, then he stopped and ran back to me all the way down the sidewalk and said, “On se reverra?” We will see each other again? Yes, I said with a smile, and I silently wished a blessing on his little head.

Spending time with this little boy almost made me start to consider child psychology in addition to the trauma work I am doing now. He was clearly saddened by the violence he had witnessed at home, but he was also very imaginative and smart. His lovely eyes, his sweet articulate way of speaking tore me apart. I wanted to spare him the violence, and I prayed he would grow up to be a man that would, thankfully, hopefully, spare the violence as well.

2 thoughts on “The Internship Begins”